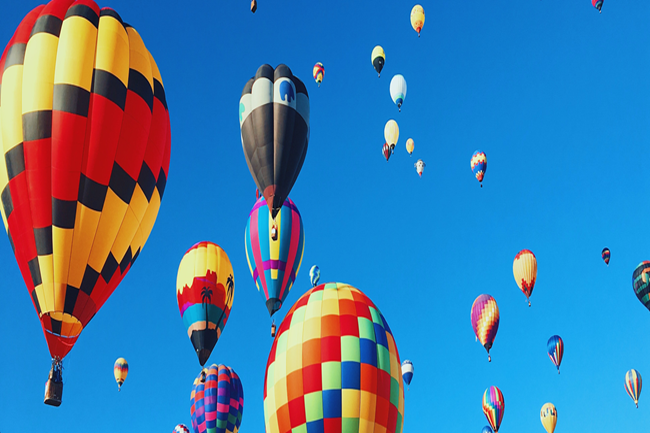 The inflation question (the sequel)

As markets debate Fed policy, the key question is whether the central bank will still boost the cycle or lean against it. It all comes down to how policymakers react to inflationary pressures. We’re more in the camp of continued support

What you need to know

The Fed has now made a meaningful upgrade to its inflation outlook by embracing a more pronounced overshoot of its 2% target. We view this upgrade as a catch-up with an economy that’s running on high pressure. This new outlook is consistent with a 2023 policy rate lift-off, which we’d been forecasting for some time. On average, growth is expected to exceed 4% per year in 2021– 23; core PCE inflation – the central bank’s preferred gauge – is seen to average 2.4%, above target (figure 1). Yet the median expectation is only two 25 bps rate hikes in 2023. This is a more muted response to inflationary pressures than under the Fed’s previous framework. We believe markets may be getting ahead of themselves by fully pricing in three rate hikes by the end of 2023.

We too expect the yield curve to flatten over time as rate hikes approach. But our macro outlook and reading of the Fed’s reaction function suggest a steeper curve versus market pricing – and for longer. There’s a limit to how hawkish the Fed could become – unless inflation were to overshoot persistently. If not, an earlier lift-off may call into question the credibility of the Fed’s new framework tolerating higher inflation for a while to make up for past misses, potentially leading to risk-off sentiment. The discussion on tapering the central bank’s asset purchases could trigger market volatility. We expect an announcement over the next few months to start executing after some time, probably for a year or so. Only at that point, after a pause to take stock, rate hikes seem plausible.

In recent months, a handful of inflation categories experiencing outsized gains have disproportionally affected headline inflation. In May, used cars alone contributed a third of the overall price level increase. Pent-up demand meeting supply bottlenecks pushed consumers willing to splurge on a new car towards second-hand alternatives. Similar dynamics are playing out in the travel and eating away from home categories. Easy comparisons relative to a year ago, when prices fell, are pushing the inflation rate higher too. These effects should fade in coming months as shortages ease, demand normalises and last year’s prices fall out of the calculations. While there is some upward pressure on overall prices, we see limited evidence of a persistent feedthrough to core inflation (figure 2). 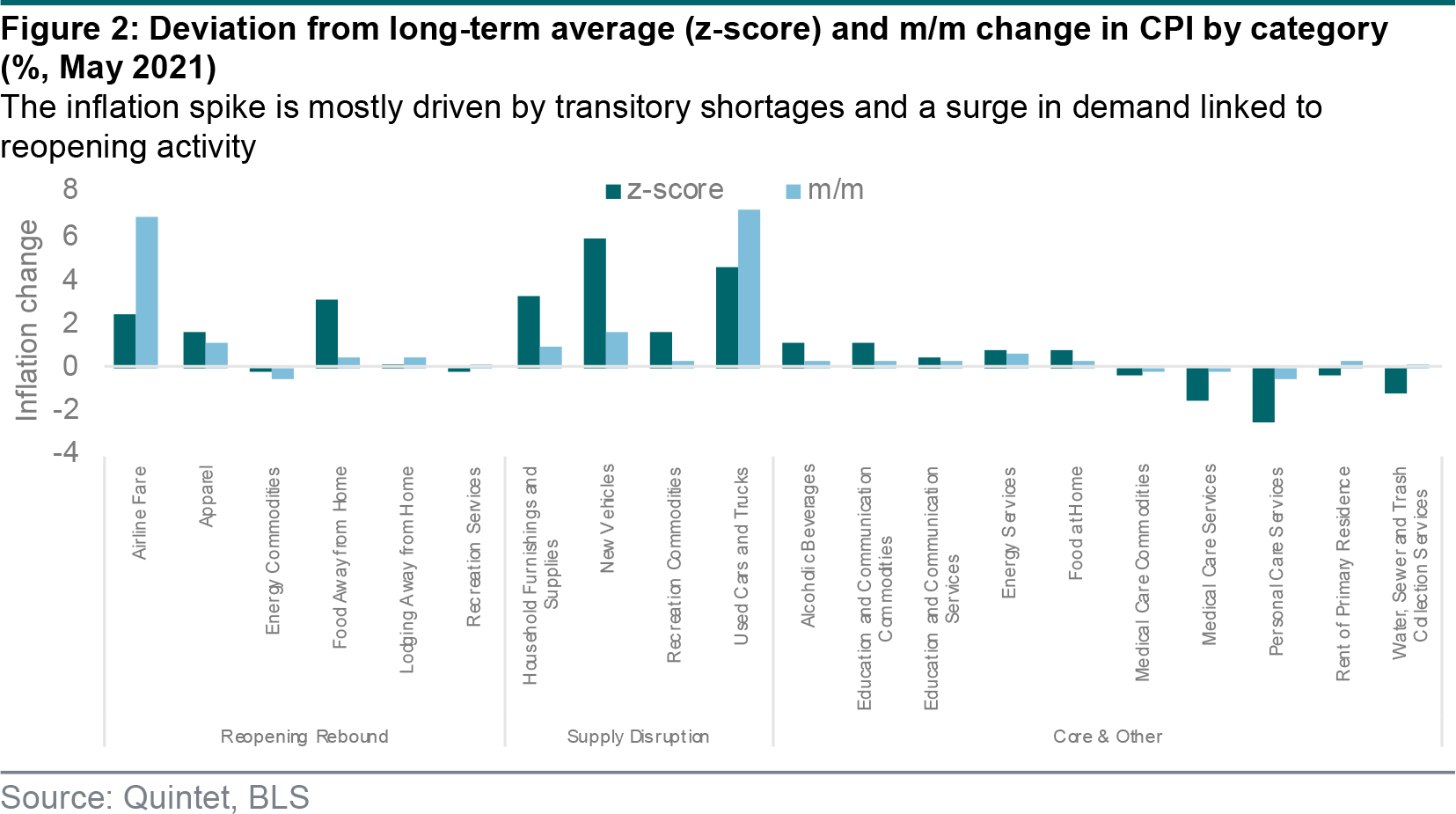 With services activity curtailed by restrictions on mobility for much of the last 12 months, manufacturing activity did benefit, as consumers shifted their spending towards goods. This boosted the price of a range of commodities, from copper used in electronics to lumber for home improvements (figure 3). In line with our expectations, these commodity prices have now started to roll over. In lumber’s case, sawmills have had time to bring additional capacity online, while copper prices at around USD 10,000 per metric ton triggered various regulatory curbs and policy actions in China to rein in speculative behaviour. The near-term case for higher oil prices may be different, however, as rising domestic and international mobility over the summer should provide extra support (figure 4).

What could cause a more protracted inflation spiral?

When it comes to the inflation debate, we remain in the ‘transitory’ camp – at least for now. One aspect that could lead us to revise our view is if inflation expectations become unanchored, feeding into a broader price and wage spiral (figure 5). So far, we see little evidence of this happening. While household surveys have risen, they remain well within historical ranges, and market-based measures have just about reached the average level of the last decade (excluding the pandemic). Forecasts appear relatively stable too – they are higher in the near term and lower further out. This suggests that recent inflation prints are more one-off price adjustments in level terms (after last year’s price declines) rather than a persistent upward trend feeding into itself.

Of course, risks of a more enduring inflation spiral would rise if we were to see mounting wage pressures across sectors and skill levels. However, overall wage growth in the US has been more or less stable throughout the crisis (figure 6). That it didn’t fall as in past recession is remarkable (and related to policy support). But it’s not spiking either. Pay is rising where there is a shortage of workers. In particular, hourly earnings are picking up for some lower-skill jobs in leisure and hospitality, but this too should pass in coming months as supplemental unemployment benefits run out (by September) and barriers to return to work diminish (via higher vaccination rates and a wider reopening of schools). Overall, we don’t see much evidence of a generalised surge in pay (figure 7). Low unionisation mitigates this risk further.

What’s the path for inflation to normalise?

The pandemic led to an extraordinary situation, where businesses were shut nearly overnight by government decree. The initial collapse in orders is clearly visible in the ISM orders to inventories ratio, but so is its rebound (figure 8). Currently, orders are very high, while inventories are very low. This typically happens in the early phase of the cycle, but this time around unfolded much more quickly. Given that reopening is uneven across countries, and dotted with setbacks, a normalisation in inventories could take longer to materialise. But once supply responds to demand and stocks are eventually rebuilt, companies could focus on adding capacity in case demand remains elevated, ultimately contributing to reduce the current inflationary pressures.

Getting back to normal – in inflation terms and in a wider sense – will require progress in a number of areas. The most obvious one has to do with the vaccine rollouts – not only within countries but globally too, as the threat to the recovery from more infectious variants has only recently been made all too clear (figure 9). Moreover, full normalisation has to do with scaling back the huge amount of fiscal support. While this was needed during the worst of the pandemic, it’s possible that’s contributing to reduce the incentive to job search. This means that reducing or eventually eliminating the ‘emergency pandemic’ benefits as economies reopen could both ease labour shortages and, probably, facilitate the normalisation in demand once excess savings are (at least partly) spent (figure 10). 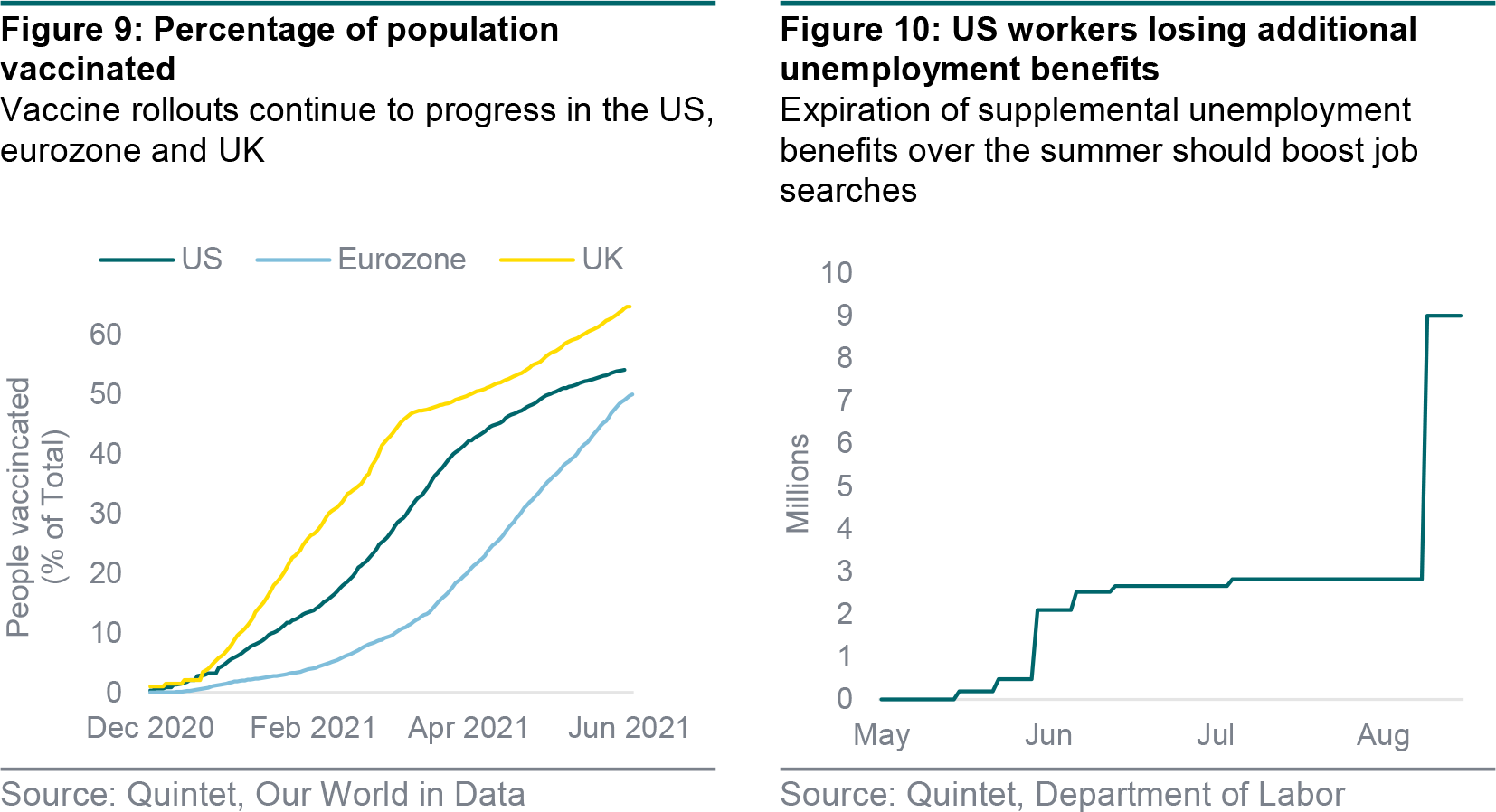 A central bank that lets inflationary pressures go unchecked could be a risk. This is because the combination of monetary and fiscal stimulus – of sustained ‘money printing’ to ‘monetise’ government debt – could at least in principle continue to drive money supply higher and higher. This, the theory goes, could lead to an inflation spiral that could only be brought under control via significant policy tightening later on. However, it looks as if the link between money supply and inflation isn’t that clear-cut. Whatever link there was before the global financial crisis over a decade ago now seems even weaker. Furthermore, money supply growth is now slowing (from a fast pace) and our expectation that the Fed will taper its asset purchases should slow it further, mitigating inflation risks (figure 11).

In our view, the Fed’s reaction function is one where the central bank continues to tolerate an inflation overshoot as long as it considers it mostly transitory. To assess inflationary pressures, the Fed looks at ‘trimmed’ inflation, which ranks price changes and excludes a small percentage of the most extreme ones in either direction, to capture the bulk of the inflation dynamic (figure 12). Rather than the consumer price index (CPI), it targets the broader concept of personal consumption expenditure (PCE) deflator, but excluding volatile components such as energy and food. Trimmed measures of PCE inflation are rising quite moderately. Importantly, the Fed has a dual mandate: price stability and full employment. The labour market is improving, but its healing is still work in progress, with 7.5 million fewer jobs relative to February 2020 (figure 13).

What are the implications for bond yields and riskier assets?

The Fed’s latest forecast shows two rate hikes in 2023 rather than zero as previously (figure 14). This doesn’t mean that the central bank is now planning to hike rates aggressively. To us, the Fed is signalling greater confidence that the economy is recovering while inflation, on average, is likely to be somewhat above target over the forecast horizon. A scenario like this isn’t consistent with policy rates close to zero. Rather, it should imply higher rates. Remarkably, the central bank is only willing to tighten very slightly, despite a boom in growth and some inflationary pressures. Whether this happens in practice remains to be seen. The Fed has tended to signal higher rates relative to what it did subsequently: there’s no need to act as much if the central bank credibly anchors inflation expectations. 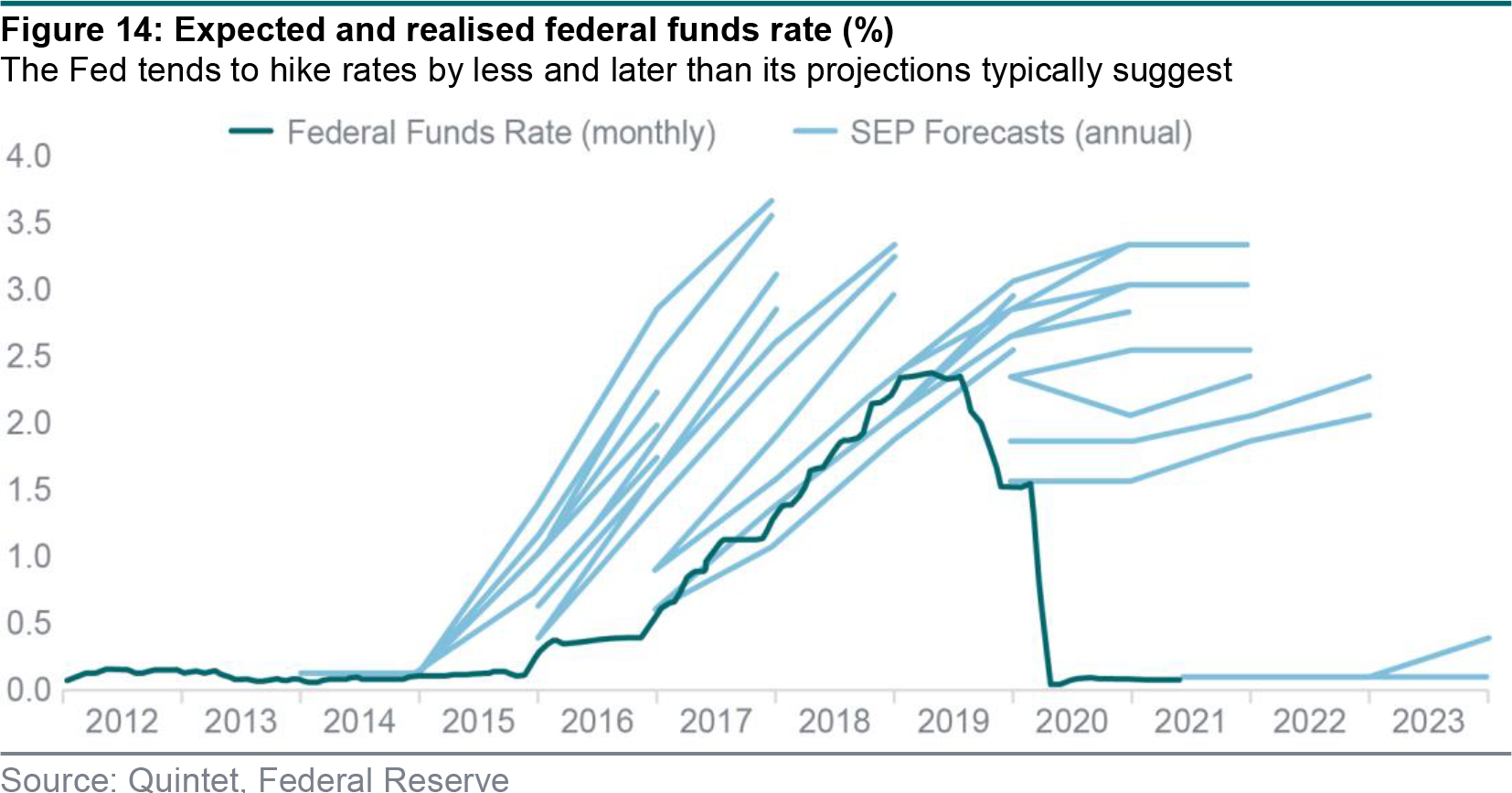 As the Fed tapers its asset purchases, we see 10-year Treasury yields rising to around 2% in 12 to 18 months (figure 15). Bouts of volatility and over/undershoots are possible, but room for much higher yields is probably limited – just like scope for this to become a major drag for riskier, ‘reflation’ assets. The Fed projects the longer-run federal funds rate at 2.5%. Illustratively, a rate lift- off in 2023 and four 25 bps rate hikes per year would imply a compounded 10-year rate slightly higher than 1.75%. The term premium – the compensation for interest rate risk – has oscillated over time, but its ratio to the level of yields is fairly stable, at just below one-third and a little over 50 bps currently, which is the average of the past decade (figure 16). Adding it all up gives us a 10-year Treasury yield projection of about 2.25%.

This document and the information and data that it contains relating to products, services or financial instruments, as well as any analyses, assessments, suppositions, judgements, opinions, and estimates presented therein (the “Information”) has been prepared by Quintet Private Bank (“Quintet”) for your exclusive and private use in the provision of personal investment advice by Quintet on the basis of your risk tolerance and suitability. Prior to any transaction or investment in the product, you should make your own appraisal of all the risks, including, but not limited to, the risks from a financial, legal, tax and accounting perspective, without relying exclusively on the Information contained in this document. Please note that the past performance of a financial instrument is not an indicator of its future performance. The Information may be changed at any time without advance notice or any notification being sent to you. Any projections and forecasts are based on a certain number of suppositions concerning the current and future market conditions and there is no guarantee that the expected result will ultimately be achieved. While the Information has been established on the basis of reliable sources and is therefore presumably correct at the date of publication of this document, it is provided with no guarantee, either express or implicit, as to its completeness, accuracy, authenticity, timeliness, validity or relevance and no liability is accepted by Quintet in this respect. This document and the Information, content, text and illustrations are the property of Quintet and/or third parties contractually linked to Quintet. It is forbidden to copy, publish, distribute, transmit or reproduce, either in whole or in part, the Information contained in this document.